<![CDATA[According to an article published by <a href="https://www.benzinga.com" target="_blank" rel="noopener noreferrer">Benzinga.com, savvy investors seeking the Holy Grail of growth and income hitched their wagons to the rising star of self-storage for the past two years. This demand has resulted in excellent returns, but somewhat frothy valuations based upon price to FFO (funds from operations) multiples, a key REIT metric. 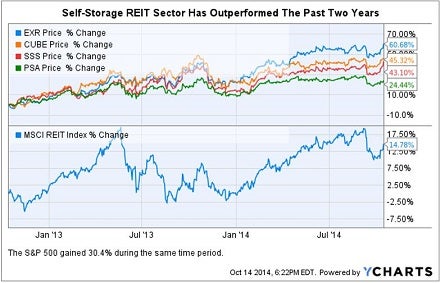 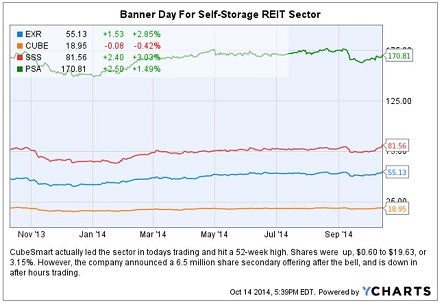 Since the Great Recession there have been relatively few new self-storage facilities constructed in the U.S. During a recent ISI Conference panel, Extra Space CEO Spencer Kirk characterized it as “a muted supply.” He elaborated that during the 2003 to 2007 time period there were ~2,600 storage facilities built each year. The self-storage industry is quite fragmented, with many mom and pop operators. Extra Space no longer develops new projects but was formerly the largest developer, accounting for only 15 new projects out of 2,600. Today it is estimated that there are more than 50,000 self-storage locations in the U.S., with only 300 to 700 being built.

It typically can take from three to four years to lease a brand new facility to the point of stabilized occupancy of 80 percent or greater. Small local developers who historically had accounted for the vast majority of the newly constructed projects now face some significant headwinds, including:

Self-storage demand drivers are not nearly as correlated to the health of the economy compared to many other REIT sectors such as office, retail, and lodging. However, in a similar fashion to hotels, self-storage can change pricing on a daily basis to respond to changes in occupancy and local market conditions. Assuming a facility is well located, demand has historically been a function of life changing events: marriage/divorce, death/birth, upsize or downsize in residence, both going to and returning from college, etc. Historically, approximately 80 percent of customers are consumers, while 20 percent of revenue is from businesses. On average, 6 to 7 percent of customers turn over per month. Not being locked into long-term leases helps self-storage REITs maintain leasing spreads between monthly rental income and the cost of capital — helping to offset the tendency for REIT shares to fall when 10-year Treasury Note rates are expected to rise.

Tale of the Tape

Based upon information provided by MLV Research for the week ended October 10, the REIT Industry is trading in the range of 17.1x 2014E and 15.9x 2015E funds from operations.